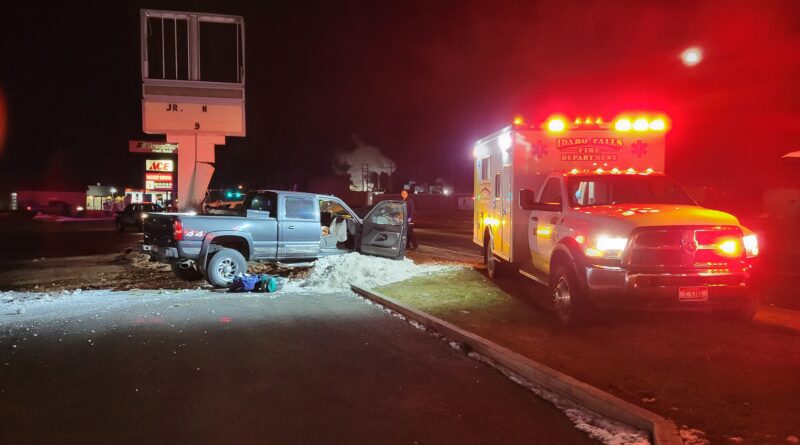 SHELLEY – Last night, two vehicles traveling southbound on State Street appear to have collided at a point where the street merges into one lane in front of Broulim’s Grocery Store. The collision caused the front vehicle to slam directly into a nearby fast-food restaurant sign.

Yesterday, December 22, just before 9 p.m., Shelley Police responded to a two-vehicle crash on South State Street where it merges from two lanes into one-lane U.S. Highway 91.

According to the first responding officer at the scene, the driver of a dark blue Chevrolet Silverado 4 x 4 pickup was merging into the left lane when it either hit or was struck by the front right fender of a red-colored Subaru Legacy.  The force of the impact caused the pickup driver to lose control and caused that vehicle to slam head on into the side of Arctic Circles’ street sign.  The crash heavily damaged the front of the pick and the restaurant’s sign.

According to the officer, a passenger in the pickup was also injured.  Idaho Falls Paramedics transported them to the hospital with non-life-threatening injuries.  The driver of the pickup and the Subaru were unharmed. Everyone was wearing their seatbelts.

Officers were attempting to figure out the exact cause of the crash at the accident scene. They were looking to see if any business cameras recorded the accident as it happened.

The Arctic Circle sign was recently repaired after a strong wind blew off its advertising panels earlier this year, according to Arctic Circle’s owner Melissa Boyd.   It will now require significantly more repair.

The accident was attended to by the Shelley Police Department, the Bingham County Sheriff’s Office, the Quick Response Unit, and by the Idaho Falls Paramedics.

The accident is currently under investigation. Community Pioneer will update this story if further information becomes available. 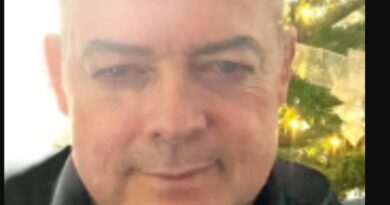 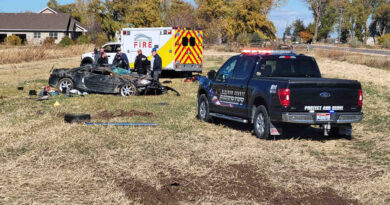 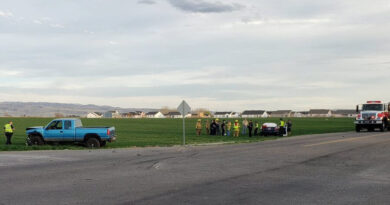