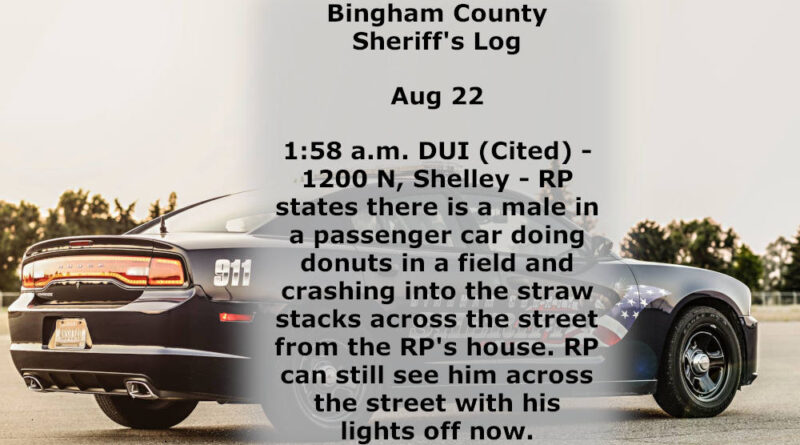 This log is only a partial report of all incidences reported to the Bingham County Sheriff’s Office. It contains only those incidences that occur in northern Bingham County. The Sheriff’s Office handles dozens of emergency calls each week, deploying police, fire, and medical services in this area. Community Pioneer omits individual’s names and specific addresses. Otherwise, the incident log is reported as written. The following is a list of most of the incidents reported and responded to by Bingham County Deputies between Aug 18-24

3:28 p.m. Water on Road — 1400 N, Shelley — Sprinkler watering across the roadway. North side of the road alfalfa field, center pivot. He does not know who the farmer is and can be contacted if needed.

1:59 p.m. Narcotics — 550 E, Firth — At of 550 E where it turns to a dirt road by the river, RP’s son saw MA in black possibly Ford truck with green fluorescent light on grill. Subject has been down there for 3 days, subject is skinny blond male 5’8 occurred yesterday. Subject chased 28 year old son and 3 grand kids with him. Subject was upset he was there. RP request LE check the area for subject.

3:38 p.m. Suspicious Circumstance — Highway 91, Shelley — South bound on highway 91 behind a red toyota PC front end taped together, driver and passenger and all over the road. On the Idaho Falls side of Shelley White 2019 Chevy truck black flatbed.

4:18 p.m. Suspicious Circumstance — 1100 N, Shelley — RP states there is a gold possibly Pontiac 4 door sedan near her residence. Has been around before and was picked up last time. He is now back, staring at the children. Goes to the river access and then comes back to the house. RP can be contacted if needed.

9:01 p.m. Suspicious Circumstance — 1400 N, Shelley — RP keeps hearing a horn or horns being blown in the area. Says they sound for a long period of time. SOunds like a horn on a semi truck. To the southwest from RP. (Could hear it over the phone)

10:02 p.m. Traffic Complaint — Highway 91, Shelley — RP following male pulling a trailer, unknown vehicle description and swerving all over the road, speeds all over and almost running over cones.

8:01 a.m. Welfare Check — 1200 N, Shelley — RP lives in California and can not get a hold of her 73 year old grandmother (name removed). Her phone has been turned off for five days. RP has called the hospitals in Idaho Falls and Blackfoot and she has not been in their care.

6:57 p.m. Theft-Grand — Sellars Creek Rd, Shelley — RP is missing his Smith and Wesson MP Shield 9mm handgun in a small black plastic case, that was in his Razer. Last seen at approx 1 p.m. today while he was camping out at Sellars Creed for a ward activity.

1:58 a.m. DUI (Cited) — 1200 N, Shelley — RP states there is a male in a passenger car doing donuts in a field and crashing into the straw stacks across the street from the RP’s house. RP can still see him across the street with his lights off now.

2:25 a.m. Accident (Cited) — Power line down and lines down near the substation, lines are not across the roadway there are people walking around, RP also heard a loud explosion but unknown if it was a car wreck. There is a male in the middle of the road freaking out.

7:42 a.m. Abandoned Vehicle — 1200 N, Shelley — RP states that there is an older silver 4 door sedan with the windows rolled down. Vehicle has been there 3-4 days. RP would like it checked on.

11:01 a.m. Animal Complaint — 1070 E, Shelley — RP states that they are missing a male boarder collie terrier mix. Black and white has a grey nose. He is a puppy. No collars or tags.

8:42 Welfare Check — 1600 N, Shelley — 911 call into Bonneville County could hear female/male yelling in the background. RP recontacted and spoke with (name removed) who was reluctant to answer questions. RP requesting to have her checked on.

8:52 a.m. Wanted Subject — 675 E, Basalt — (Name removed) is wanted and is currently at her parent’s residence at the above address.

9:37 a.m. Animal Complaint — 700 N, Firth — Barking dog behind the RP’s address, (name removed) is the owner. This is an ongoing issue. Happened all day yesterday. 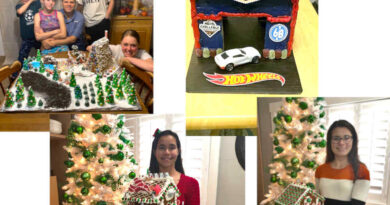 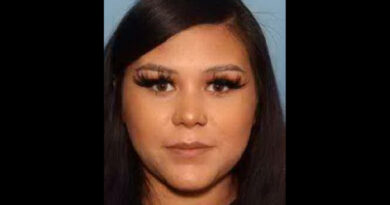 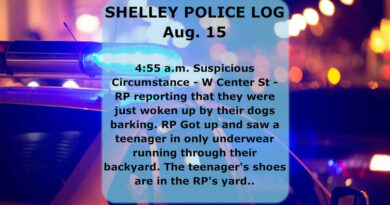